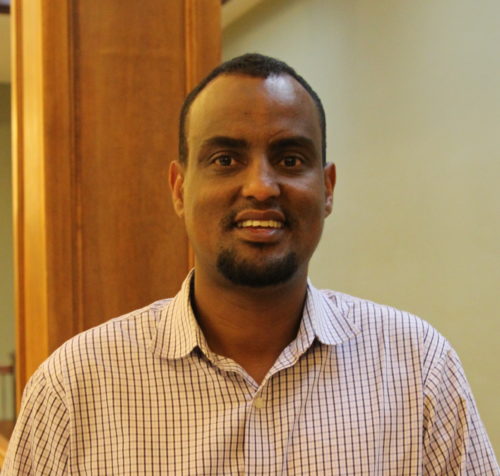 “I am a person, and a friend, and a neighbor, and a husband, and a community leader, and somebody that cares a lot about this St. Cloud community…that’s more important to me than anything else.”

Haji Yusuf takes pride in being active in his community. He strives to unite groups of people in order to cultivate an accepting and tolerant world.

Mr. Yusuf was born in the city of Garissa, Kenya. In his childhood, he attended school and played in the nearby Tana River. As an ethnic Somali living in Kenya, Mr. Yusuf and his family were victims of persecution and discrimination. His parents died when he was young so his older brothers helped raise him.

Although Mr. Yusuf never planned on moving to the United States, an opportunity arose for his to obtain a student visa, and he moved to Florida. When he arrived, Mr. Yusuf noticed that his American life wasn’t like what he saw in the movies. He struggled to find work, living with friends and relatives until he could support himself.

Mr. Yusuf decided to move to Minnesota and earned his bachelor’s degree from St. Cloud State University. Since then, he has founded his own organizations including Orange Oak Media and #unitecloud. In his spare time, he enjoys filming and video editing, a passion of his since his youth. Mr. Yusuf and his wife have two children and live in St. Cloud, MN.