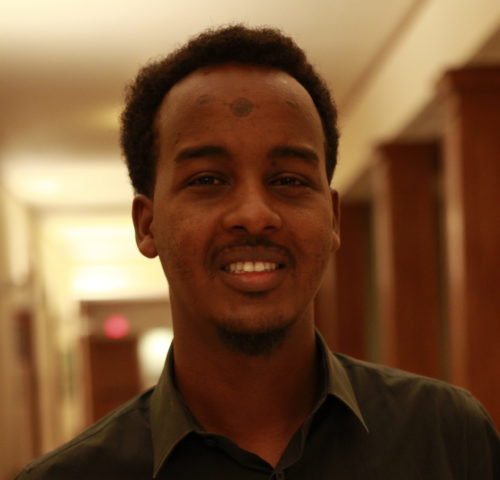 “Some people think refugees are dangerous, they’re terrorists…I want to change that perception and tell people that refugees are people like me who want to come and build this great state.”

Hussein Mohamud—better known as Suud Olat—spent twenty years living in a Kenya refugee camp. There, he learned about telling stories of refugees and continues this work today.

Suud was born in southern Somalia in the town of Luuq. When he was a year old, his family fled the country and became refugees in Dadaab, Kenya. Suud was very active in the camp and developed an interest in storytelling. After spending two decades in the refugee camp, Suud was selected for resettlement in Nashville, Tennessee.

When he arrived in the United States, Suud received a lot of help from Catholic Charities of Tennessee. He was assigned a caseworker and found a job working for Dell Inc. Later, he worked for Catholic Charities as an assistant caseworker. Three of his sisters ended end up living in Minnesota, and Suud moved there to reunite with his family.

Currently, Suud is a student and works as a freelance journalist specializing in giving a “voice to the voiceless.” He uses his experience with stories in Dabaab to write about refugee stories, trying to change the negative perceptions many people have towards refugees. In addition, he speaks around the country about the global refugee crisis.